Knoweside Flock in the Scottish Borders

We started keeping Icelandic sheep in late 2010, when we bought our first ewe: Windy-Gowl Mishca. 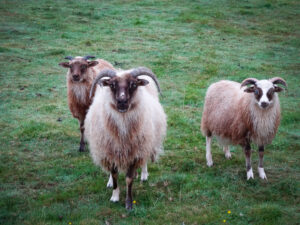 We had been given the use of a small field and Alistair became the proud owner of 3 Jacob ewes when they caught his eye at the local market, along with 5 Suffolk cross lambs (for fattening) in August 2010. Having been to the market he was keen to show me the buzz of the sale day when I was next on holiday in the October of that year. Having a quick look at the sale catalogue before I went, I noticed an entry for an Icelandic ewe for sale. Not knowing at that time what this even looked like I was a bit intrigued and quite definite I wanted it to join our little mixed flock.

Once we arrived, I searched the market pens for her and on seeing her I knew she was coming home with me (Alistair at this point needed a bit of persuasion). But when bidding started because no one really knew what she was it was very slow and I got her without breaking the bank. She came home to the field that night and then we had to start looking into Icelandic sheep, we contacted Jill Tyrer the then secretary of the Icelandic sheep group. She was so helpful, she got in touch with the person who bred Mishca and agreed to register her as she is 100% pure. Then the next problem was where on earth were we going to get a ram to cover her. Jill helped us out again; she at that time had a ram lamb Zen Ulfersson for sale, so off we went on a stormy weekend in early January 2011 to pick him up from Wales. When we arrived home and put him in the field Mishca took one look and turned her back, not impressed. However, in June that same year we welcomed our first two Icelandic lambs, both rams but totally different: Knoweside Lachlan and Knoweside Harris. 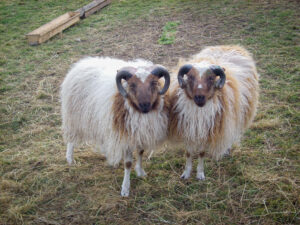 Harris was always my favourite but he was also the most annoying and mischievous animal I think we have ever had. From a lamb to an adult he hated his feet being touched, if a sheep could become hysterical, he did whenever you went near his feet. While he was still a small lamb his nose got the better of him and he ventured too close to a badger, he ended up with his mouth being torn so much that you could see through his cheek. We took him to the vets on arrival he took one look at him and didn’t give us much hope of Harris surviving. Not wanting to lose him I started putting him into a little pen each morning and hand feeding him, slowly he gained weight and his mouth did heal, after a while you couldn’t really tell there had been anything wrong with him unless you looked very closely. As if that wasn’t enough trouble to get into, he took to lying in the mineral tub whereupon he would then get himself stuck to the molasses and we would have to peel him from the tub when we went into the field. If ever there was trouble in our field he was usually involved in some way, but I still had a soft spot for him. Sadly, we lost him 2 years ago but we were able to let him cover some ewes before then so we still have his daughter Knoweside Hannah. Thankfully she is not such a handful as her father but is the double of her mother Dewsnaps Annika, who definitely was Alistair’s favourite sheep. 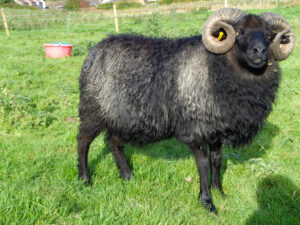 Unfortunately, Zen died in late 2011 and we bought our next ram, a lamb from the Island of Islay: Kindrochaid Paddington. He was a character, we kept a few of his young and after a couple of years he needed to move on. He went up to Aberdeenshire where he managed to cover not only Marc’s Icelandics but his Hebrideans and the neighbour’s commercial flock as well. We never knew he could jump! Next came Fernbourn Feannor; he was so laid back you sometimes wondered if he was still alive. He didn’t believe in getting up to eat he just waited till you brought it right to his nose. I have seen us having to step over him, but put him in with his ewes and boy did you have to watch your back. Again, we kept his ewe lambs to increase our flock so along came Chaora Dubh Absalon; he likes to rule the field and is an absolute terror to our big Jacob ram. Now in 2020 we have welcomed a new boy, Pen-Y-Lan Bracken.  We have two home-bred gimmers to go to him as well, Jill and Josie, so hopefully a bit of new blood in the Knoweside flock. This will be our 11th year of lambing and each one is as special as the first. You never know what colour or pattern is going to pop out, although as long as mother and young are healthy this doesn’t really matter.

Over the years we have sold  the fleece to hand spinners and a lot of our lambs both ewe and ram ones, as well as some gimmers. The best part for us is seeing photos of how these animals grow and seeing them with lambs at foot, or if it’s a ram, seeing how his lambs turn out. It gives you a good feeling and makes it all worthwhile. 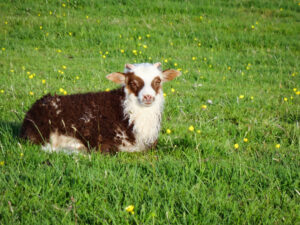 Our most memorable animal or the animal we respect most has to be Mishca; when she first arrived at our field she stood for a few days as if she was staring out over the hillside. I often wondered what she was thinking about. We found out as we were about to buy her that they had just taken her away from her lambs and separated them in another pen to be sold, Alistair asked them to include them with her but they wouldn’t. Was she thinking where are they or these horrible people took me away, we will never know but after watching her with her lambs over the years I truly believe she was thinking of them, she took on being leader of the flock and still is to this day, if for any reason she isn’t around and something happens in the field, the rest of them just run to her and wait for her decision on the threat. She also adopted one of the Suffolk wethers and as someone named him (not me!) he is still with us today. He is now 10 years old but he still rums to mum when there is trouble. Over the years she’s given us a lot of lambs and is a fantastic mother and always has a lot of milk. We have kept a few of her ewe lambs over the years and all have been fantastic mothers. Mishca will be 13 in March 2021 and  is having a well-deserved retirement and a special handful of food sneaked past the rest. She will be with us until she passes and I know we will both be very sad when that day comes. Alistair once said to me I don’t keep Mishca, she stays because she wants to. I thought that a very strange thing to say, of course we keep her we have fences and gates but, all these years later I actually believe those words now. She is one in a million and I don’t think we will ever find one as special as her although we will keep trying.